Can You Put Cast Iron in the Dishwasher? 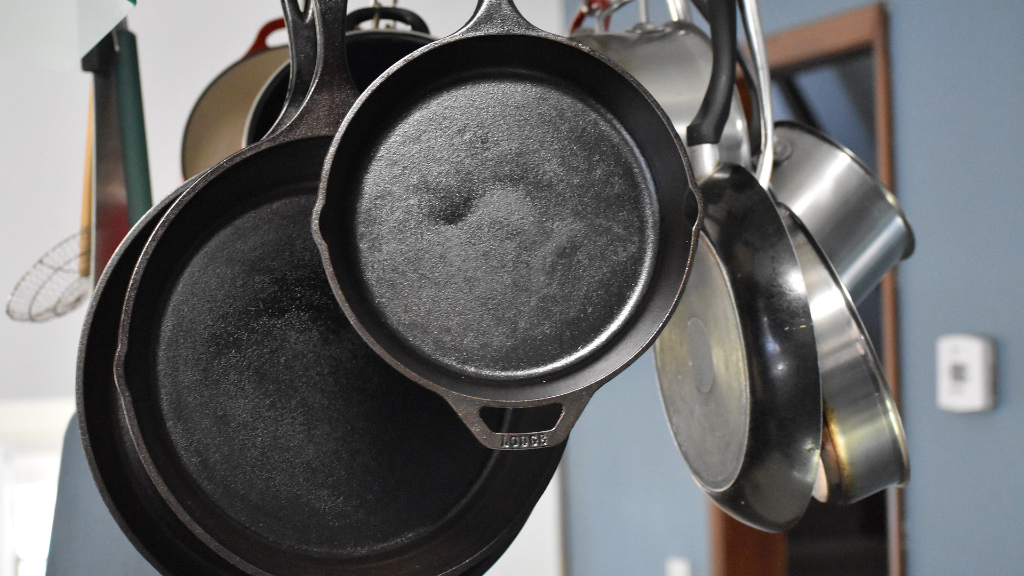 Home chefs enjoy a lot of practicality from their cast iron pans. It’s hard to beat a durable workhorse that can travel from the oven to the grill to the dinner table, all while supplying a rustic essence that can make anything taste better. Versatile and accessible, it’s no wonder that cast iron cookware continues to grow in popularity!

But for all their benefits, one glaring inconvenience of cast iron skillets compared to other cookware is their susceptibility to rust. Cast iron upkeep doesn’t have to be challenging, but it demands a unique approach. You can’t hand wash it like a typical pot, and putting cast iron in the dishwasher will only leave you with a rusted-out skillet and a lengthy restoration project.

Why Does Cast Iron Rust?

Cast iron cookware consists of roughly 93–97% iron, 2–3% carbon, and small amounts of other elements such as sulfur, silicon, and manganese. It actually has more carbon in it and less iron than steel, though it rusts just as easily.

Cast iron gets rusty from prolonged exposure to water and oxygen. An electrochemical reaction occurs in which iron combines with dissolved oxygen in water, loses electrons, and corrodes, forming iron oxide, or rust, in the process.

Although most metals corrode, some are more impervious to breakdown than others. Aluminum, for instance, also oxidizes quickly but forms an aluminum oxide film on its surface that protects it from further corrosion. The chromium content in stainless steel has a similar effect, creating an oxidized seal against exposure.

Unfortunately, the oxidized layer (aka rust) formed from cast iron is weak and prone to cracking and flaking. As rust wears off and opens gaps, it exposes fresh underlying iron to water and oxygen, allowing the degradation to continue until the cast iron is worn away. Seasoning provides a polymerized protective layer, allowing us to hand-wash cast iron, but soaking or drenching your skillets will undoubtedly result in substantial rusting.

Putting your cast iron pan in the dishwasher will cause it to rust. Dishwasher detergent can strip the seasoning, exposing the pan’s interior to water and oxygen, and the prolonged soaking will give the entire surface plenty of time to oxidize.

The hot water in the dishwasher will speed up the rust formation process. High temperatures are one way to accelerate electrochemical reactions, which is also why you should use hotter water when removing tarnish from silver. Between the high heat and the lengthy soaking cycles, dishwashers provide the optimal environment for cast iron to deteriorate.

How to Clean Cast Iron Without Damaging It

Building a healthy seasoning layer is the foundation of maintaining a cast iron skillet. A well-seasoned pan offers a non-stick coating that makes cooking your favorite meals much easier and provides extra protection against standard cleaning agents. The baked-in polymerized coating is far harder to degrade with soap than a layer of oil or grease. It will have no problems tolerating hand-washing.

You’ll want to avoid certain materials to protect the seasoning layer, but soapy water is the most effective way to keep it intact while removing excess cooking oil and food particles. Follow these five steps to clean your cast iron pan after a meal without damaging it.

Before washing your cast iron pan, remove large food particles with a plastic spatula or wooden spoon. You can try scrubbing tough grime with coarse salt, a non-abrasive scrubber, or a pan scraper.

A chain-mail scrubber is an excellent tool to keep on hand to scrub your cast iron skillet without worrying about wearing away the seasoning layer. In a pinch, a crumpled ball of aluminum foil can also work. Avoid using steel wool or copper scrubbers to clean a rust-free, seasoned pan, as you’ll risk digging through the seasoning layer.

Wash the inside of the skillet with warm water, a few drops of mild dish soap, and a stiff brush or sponge. Rinse the pan thoroughly with plain water.

Drying every last drop of water is crucial in preventing rust from building on the pan. Use a clean cloth or paper towel to hand dry the entire interior and exterior of the pan.

After drying your cast iron skillet, spray or rub a thin layer of vegetable oil over the surface. Wipe away any remaining oil with a clean cloth or paper towel before storing it.

At this stage, you heat the pan on low over the stove for about 10–15 minutes. Remove any excess oil with a paper towel before putting it on the stovetop. Heating the cast iron will help the oil layer set and any missed moisture to evaporate before it can rust the pan.

Correctly storing your cast iron skillet is as crucial as washing it properly. Keep your pan in a cool, dry cabinet. Place a paper towel over the interior surface to separate it from other dishes stacked on it and catch any potential moisture.

How to Deal With a Rusty Cast Iron Pan

If you took the hard way to find out why you should never try to clean cast iron cookware in the dishwasher, you can still restore it, but it will take a little time and elbow grease. Unless it’s in a small area outside the cooking surface, you’ll have to scour away all the rust and re-season your skillet from scratch.

To start, scrub away the rust with steel wool, salt, or an abrasive scrubber. The non-stick protective coating is toast by this point, so this is the only time you don’t need to be as gentle while cleaning the pan. Wash, rinse, and thoroughly dry the skillet after removing the rust.

Re-season the cast iron skillet with a thin layer of your cooking oil of choice spread over the entire interior and exterior cast iron surface. Heat it in the oven at 400°F or higher for one hour to bake in the seasoning. You’re now ready to use your cast iron pan again. Just remember this time around that cast iron isn’t something to put in the dishwasher with the rest of the dirty dishes.

Putting a cast iron pan in the dishwasher isn’t the end of the world, but it’s an efficient way to undo a lot of hard work and set yourself up for even more. Play it safe with your seasoning, and follow the proper steps to keep your cast iron skillet in tip-top shape.

Need a little extra help with the dishes? If caring for your cast iron skillet is taking time from your other house cleaning chores, take a couple of minutes to schedule a helping hand with Anita’s. Request a booking to find expert, local cleaners to fill the gaps in your cleaning routine!